One Team. One Race: Honouring the Cardiff Bay Rugby Codebreakers

Some of the country’s greatest sporting heroes are to be immortalised in a permanent artwork designed to ensure their stories – and the story of the proud and vibrant multi-cultural community which helped shape them – are never forgotten.

The project will raise money to create three statues chosen from 13 sports stars who made a telling contribution playing in Rugby League over the past 120 years.

All thirteen nominees grew up within a three-mile radius of Cardiff Bay. Many battled prejudice and racism before leaving Wales to find fame as Rugby League superstars in the North of England.

The creation of a statue to Cardiff Bay’s legendary rugby ‘codebreakers’, who left a lasting legacy on the world of rugby league, has taken a major step forward in its fundraising campaign.

The statue, which will honour three of the leading players who controversially moved from amateur rugby union careers to star in England’s professional rugby league teams, was the subject of a fundraising campaign led by South Wales businessman Sir Stanley Thomas OBE.

Now, as it approaches its target, the fundraising committee has commissioned sculptor Steve Winterburn to create the monument to the sporting heroes, represented by Billy Boston, Clive Sullivan and Gus Risman, all from Butetown and the old Tiger Bay area.

Said Sir Stanley: “I made a commitment two years ago to achieve our fundraising target and commission the statue within two years. Despite Covid drastically impacting on our fundraising efforts, what we have achieved is remarkable.

“I would like to thank Vaughan Gething MS, the Welsh Government, Cardiff Council, as well as Gaynor Legall, the chair of the Heritage and Cultural Exchange, Gareth Kear, head of the Welsh Rugby League, our committee and advisers and, of course, the public who have donated to the cause.”

Winterburn, of Yorkshire Fine Arts, has a wealth of experience memorialising sporting legends and has already immortalised Billy Boston in a statue in Wigan and created the iconic rugby league ‘Heroes’ statue at Wembley Stadium.

Boston, along with Sullivan and Risman, were hailed as trailblazers when they moved north, overcoming prejudice to become stars not only in their new adopted communities but also in the Great Britain teams they represented.

“They brought honour to themselves, their families, the game and the communities where they were brought up,” said a Cardiff council spokesperson, “and this statue will be a fitting tribute to these heroes. We are examining the most suitable place in Cardiff Bay to site it when it is completed.”

Vaughan Gething, the Senedd member whose constituency includes Cardiff Bay, said: “It has taken Wales a long time to honour some of these sporting heroes and I believe this statue will leave a long-lasting legacy where the greatness of these players is recorded for future generations.” 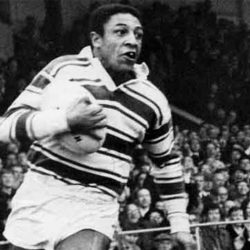 Clive Sullivan, the Cardiff-born sporting legend set to be immortalised by a new statue in his home city, is to be honoured at this year’s Rugby League World Cup. 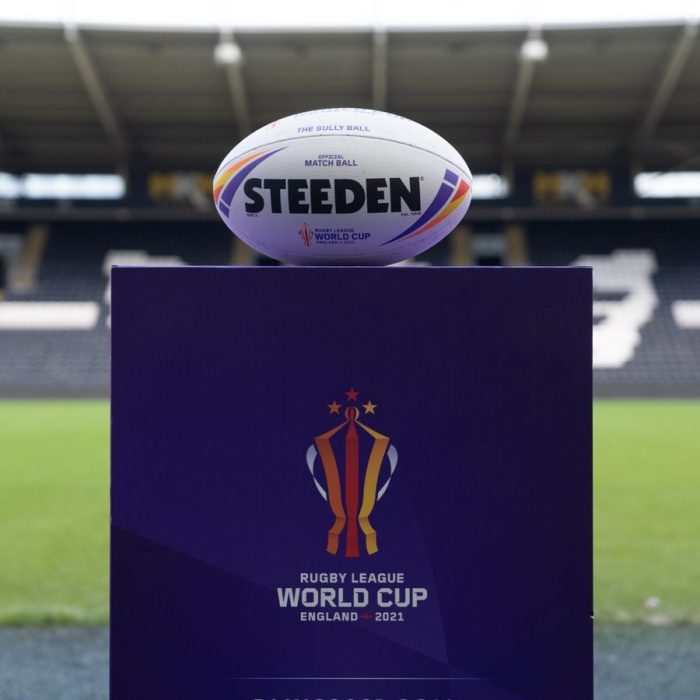 Born in Splott in 1943, Sullivan was the first black sportsman to captain a British national team and the last man to lead a British team to World Cup glory, when his remarkable try against Australia in the 1972 event helped Great Britain to win the title.

Though he died of cancer in 1985 aged just 42, his fame in Cardiff has long been assured and he is revered as one of rugby’s ‘Codebreakers’ – the players who controversially switched from the amateur ranks of rugby union to become paid rugby league stars. Some battled racism and prejudice before being hailed as heroes in the north of England.

Now Sullivan’s fame will reach a new generation of rugby league fans as this year’s tournament organisers have named the match ball to be used in all 61 games across the men’s, women’s and wheelchair events the ‘Sully Ball’.

It was unveiled at the MKM Stadium, the home of Hull FC where Sullivan remains the all-time leading try-scorer, and the honour recognises Sullivan as one of Wales’ greatest sportsmen who represents the core values of the tournament and the history of rugby league and acknowledges the significant impact he had on the sport.

“My father would be both honoured and humbled to see his achievements recognised in this manner,” said Anthony Sullivan, himself a former Wales dual code international. “For all the family it will be very special to see him appreciated in this way and for his name to positively impact future generations within the sport.”

In Cardiff, Sullivan will be one of three ‘Codebreakers’ – alongside Billy Boston and Gus Risman, all from the Butetown and Tiger Bay areas of the city – featured on a huge bronze statue now being sculpted by renowned artist Steve Winterburn. It will mark the contribution to the sport made by 13 players, the so-called ‘Cardiff Bay giants’, who made a huge impact on rugby league.

Cardiff Council leader Huw Thomas, the vice-chair of the committee which has so far raised £150,000 towards the statue, said he was thrilled that Sullivan’s latest honour has come at a key moment. “The first semi-final of the World Cup will be played on the 50th anniversary of Clive’s great try against Australia and I’m sure we will be reminded of what an iconic moment it was.

“We as a council are committed to honouring all the Codebreakers and the statue will take pride of place at a key location in Cardiff Bay and ensure that their stories, and the story of the proud and vibrant multi-cultural community which helped shape them – are never forgotten.”

Included among the 13 Rugby Codebreakers, who all hail from the Cardiff Bay area and surrounding neighbourhoods are:

The project was inspired by calls from the Butetown and wider Cardiff Bay communities for a fitting tribute to the players who did so much to improve race relations across Britain.

Businessman and philanthropist, Sir Stanley Thomas OBE, will take on the role as the chairman of the fund-raising committee, which also comprises community leaders from Butetown as well as representatives from Wales Rugby League and the Welsh Sports Hall of Fame.

The project has the full backing of Cardiff Council, having been convened by council leader Cllr Huw Thomas, who is also vice chair of the committee.

‘One Team – One Race. Honouring the Cardiff Bay Rugby Codebreakers’ is gaining charitable status by partnering with ‘The Heritage & Cultural Exchange Archive – Tiger Bay and the World’, a highly-respected charity already established in the heart of the old Tiger Bay area. The committee is also supported and advised by Capital Law and Azets Accountants.

What they have to say about the project

Cardiff has never really done enough to recognise its sporting greats, especially in the Butetown community, where so many superb rugby league players came from. We must give recognition to this community. I am delighted to have been invited to Chair the committee and I want to see this statue erected within two years. It is vital that players like Billy Boston, now 86, are able to see it completed within their lifetime. It is important we start this work immediately and I have made a financial contribution to kick-start it. But it is very much a community project and I am sure they, along with the rugby league clubs and authorities in the north, will get behind it.

The exceptional achievements of so many rugby players from Cardiff Bay’s, multi-cultural melting pot have for too long been overlooked. They not only brought honour to themselves, their city and their nation, but also helped to break down the barriers of racism and social injustice. They strode confidently into the wider world, and their example and achievements are an inspiration to us and future generations. It is time for Cardiff to properly celebrate them.

To have a project like this, honouring so many of the greatest Welsh rugby league players of the past, is just monumental. It is a watershed moment for us. In the North of England they all talk about Tiger Bay and the great players who went up to play rugby league from Cardiff. We need to reflect on our rich past and use it as a signpost for the future. It is not just about erecting a statue, this is a project that has at its heart education, sporting excellence and social justice.

This project will be a huge educational tool for the youngsters in the Butetown area and will act as an inspiration for everyone. What these players achieved on the sporting field was remarkable, but their exploits run much deeper than that. Many of them played a part in breaking down social and racial barriers. More than that, they all proved that you can come from Butetown and the Cardiff Bay area and conquer the world.

I grew up in the same community in Tiger Bay as the Bostons, Dixons and Freemans. They were heroes to us then for their achievements and they still are. We want their great deeds to be recorded for future generations so they can be a constant source of encouragement and inspiration.

This is a fantastic project that has our wholehearted support and backing. Cardiff has produced so many of the world’s finest rugby league players and a statue to recognise their outstanding achievements is the most fitting way to not only record their incredible contributions, but also to act as an inspiration for the future. None of them ever forgot their roots, but they were able to leave their own communities and use their considerable sporting talents to enhance not only their own reputations, but also that of Wales.

National Sporting Heritage Day exists to share and celebrate the amazing sporting heritage which exists in our communities. Sporting Heritage encourages individuals and organisations to use the event to raise awareness of previously unrecognised or under-represented sporting heritage. This project embodies that ethos and will begin to share so many diverse achievements for the first time whilst acting as inspirational stories for the future.