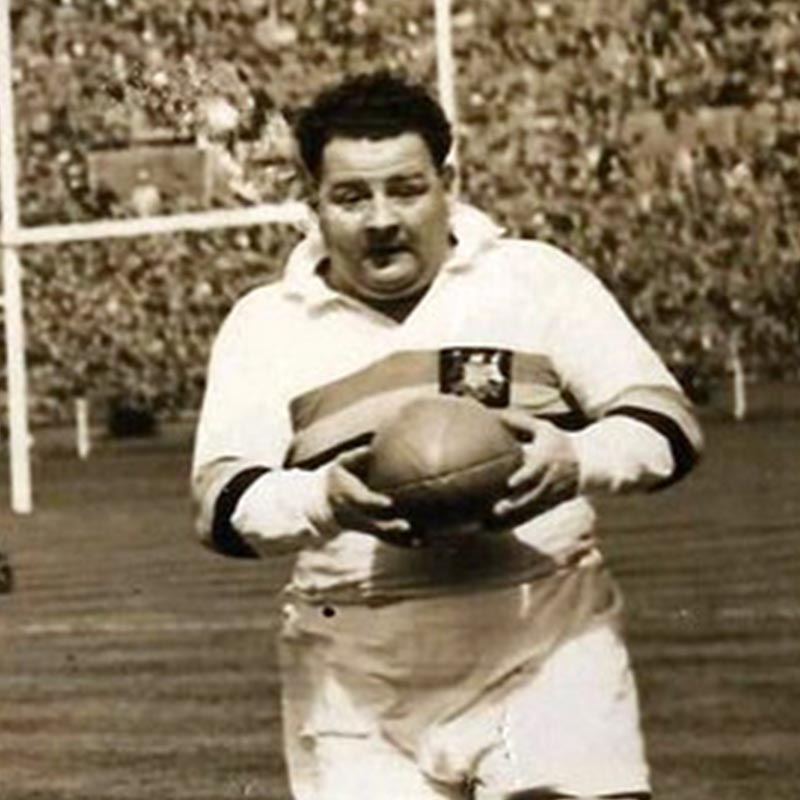 Born on 28 May, 1913, Frank was one of 10 children who lived at 52, Wedmore Street, Grangetown. His father, Frederick Whitcombe, was a blacksmith’s striker in the Dry Docks by day and a prize fighter in bare-knuckle boxing in Tiger Bay by night. He went to Ninian Park Council School and after leaving at 14 he worked for McNeill’s The Coal. He had a final Welsh trial at rugby union and played for Cardiff, London Welsh and the Army before heading North. He joined Broughton Rovers in 1931 and made 123 appearances for them before joining Bradford Northern in 1938 for a then record fee of £850. He went on to make a further 331 appearances for them over a decade of service. At Northern he played in five Challenge Cup Finals, including three on the trot at Wembley. He was a winner in 1944, 1947 and 1949. Although Northern lost in 1948, he picked up the Lance Todd Award as the player of the match – the first time it had been presented to a player on the losing side. He won three of his five Championship Play-Off Finals (1940, 41, 45) and all four Yorkshire Cup Finals (1941, 42, 46, 49). He also won three Yorkshire League titles (1940, 41, 48). He won 14 Welsh caps and toured Australia with the famous 1946 Great Britain ‘Indomitables’ team, playing more games than any other player.  Captained by Gus Risman, GB won the series 2-0 with one game drawn, making them the only British side not to suffer defeat in an Ashes series down under.